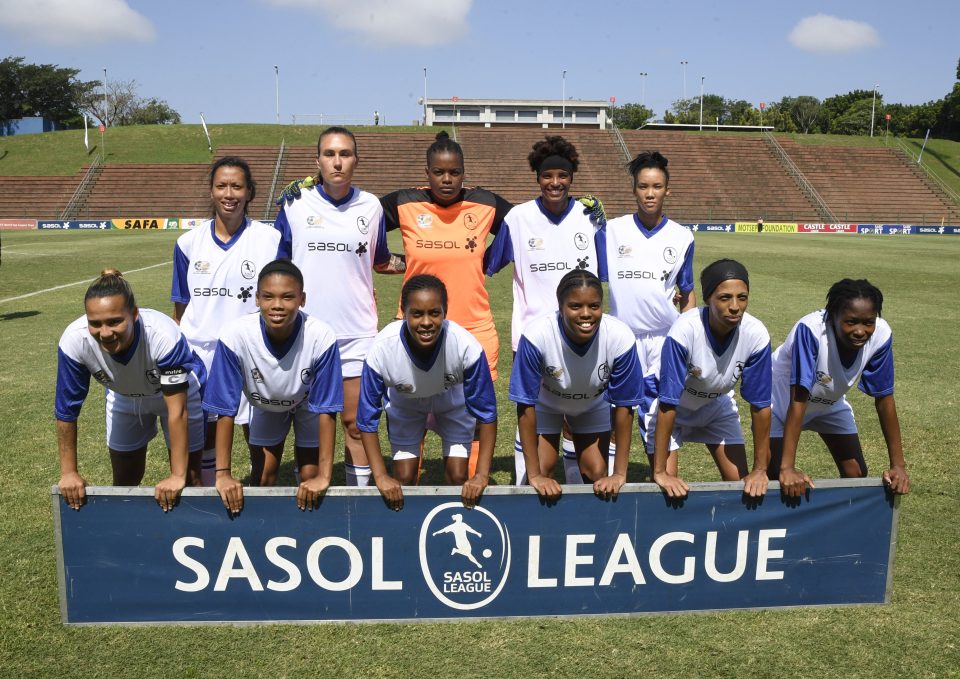 THE final match day of the Sasol League National Championship was nothing short of excitement especially on the field. The finalists, City Lads FC from the Eastern Cape and Western Cape based Vasco da Gama displayed competitive football fitting for a women’s finale.

Vasco was the victorious of the two, winning the match 4-3.

The weeklong tournament produced a total of 51 goals from 12 matches.

The sweltering heat impacted on the pace of the game however, from early on in the match Vasco showed intent and determination to be crowned the champions. They pressed up high into Lads’ half of the field which resulted in early goals from Astrid Bok and Miche Minnies within the 10 minutes of the game. In turn, the Vasco defence frustrated the Eastern Cape side which resulted in attempts to shoot from range but none of their efforts got to the back of the net. Tarran January finally found the back of the net six minutes before the halftime break. Former Sasol sponsored Banyana goalkeeper, Roxanne Barker made sure to extend Vasco’s lead into half time getting the third goal in the referees’ additional time.

Amanda Nteyi continued to be the busier goalkeeper in the second half with Ashraf Calvert’s side looking for more goals from early on. Coach Terry Mrwerwe was forced to change his strategy upfront and moved former Banyana striker, Nandipha Booi, whose hattrick helped Lads qualify for the final, from defence. This didn’t result in a goal in open play, but Nosipiwo Bottoman was able to increase her tournament goal tally by sinking in Lads’ second of the game. Booi later got onto the score sheet from the penalty spot with four minutes left in the game.

Minnies wrapped the match when she scored her second of the match during the referee’s optional time. She also finished the tournament as the top goal scorer with six goals.

Apart from the prize monies, both sides have been promoted to the Hollywoodbets Super League, becoming the second batch to get promoted after Limpopo’s Ma-Indies and JVW FC of Gauteng in the 2019 edition of the Sasol League National Championship. The host team, Lindelani Ladies will take home R60 000.00 as the third-place team.

The weeklong tournament continued to be a healthy hunting ground for coaches around the country. Bantwana coach, Simphiwe Dludlu who is preparing her side for the FIFA Women’s Under-17 World Cup qualifiers got a chance to watch Siphesihle Madiya and Nomphelo Yakuphi, who were part of the recent Bantwana camp, representing their clubs, Lindelani Ladies and Copperbelt Ladies respectively, in the weeklong tournament.

Two-time Sasol League National Championship winning coach Jerry Tshabalala, Anna Monate, Nthabeleng Modiko of the University of Johannesburg and Durban Ladies chairwoman Mary-Jane Sokhela and coaches Mnqobi Xaba and Nhlakanipho Magcaba also had their eye out on the talent during the competition.

Although all the players and referees demonstrated the spirit of #Limitless during the entire championship period, some stood out and were presented with individual prizes as follows: