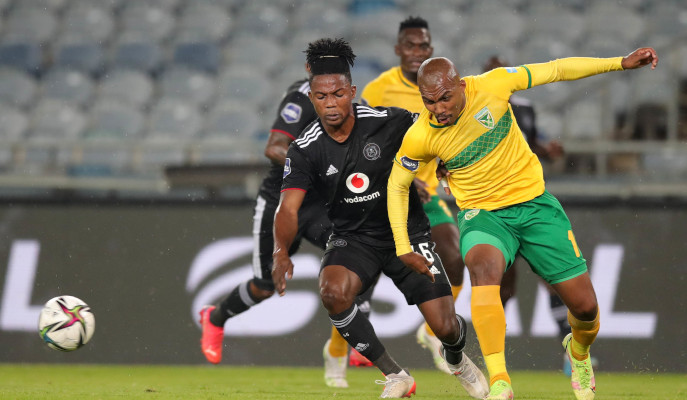 ORLANDO Pirates failed to capitalise on Stellenbosch’s stalemate earlier in the evening after they played out to a goalless draw against Golden Arrows in a DStv Premiership match at the Orlando Stadium on Wednesday night.

Abafana Bes’thende came closest to breaking the deadlock when Nduduzo Sibiya struck the woodwork with a free-kick in the closing stages of the first half.

In the end the DStv Premiership rivals had to settle for a share of the spoils, with Pirates remaining a point ahead of the third-placed Maroons and Arrows unmoved in 10th position.

Chances were at a premium in the opening 45 minutes as the two teams pretty much cancelled each other out, with most of the action taking place in the middle of the park.

Neither goalkeeper was seriously tested, although Nkosingiphile Gumede was alert to the danger in the 36th minute as he rushed out to smother the ball before Deon Hotto could get there.

Gumede breathed a sigh of relief three minutes later when Goodman Mosele attempted to catch him off his line, but the midfielder’s speculative long-range effort missed to the left of the goal.

Fortune smiled on Pirates in the 41st minute as Sibiya’s free-kick took a deflection off the wall and clipped the outside of the right post.

The first half drew to a close with Hotto blazing over the target from inside the box after meeting Ntsako Makhubela’s cross.

Kwame Peprah had the first sight at goal after the restart, but the Ghanaian striker failed to test Gumede with his header from a 48th-minute corner.

Happy Jele was also guilty of not testing the visiting keeper from close range as he fired into the side-netting on 52 minutes, while Lindokuhle Mtshali squandered a good opportunity for Arrows 16 minutes later after placing his free-kick to the right of the goal.

Gumede was finally called into action in the 72nd minute to deny Kabelo Dlamini, who tried to pick out the far corner from Hotto cut-back pass, and he pulled off another fine save four minutes later to keep out Zakhele Lepasa’s flicked header.

The visitors quickly countered and Pule Mmodi advanced into the area before dragging his shot wide of the left post.

Sbonelo Cele had a chance to win it for the KZN outfit two minutes from time, but couldn’t keep his shot down after connecting with Saziso Magawana’s cross, while Dlamini produced the same result at the other end in stoppage time from Terrence Dzvukamanja’s neat layoff.

Elsewhere Stellenbosch shared a spoilt with the visiting Swallows who forced them into a 1-all draw.